Situated right alongside the small Jalisco town of Teuchitlán, whose name derives from a Hispanic corruption of “place dedicated to divine forces,” (Teotzitlán in Nahuatl), Guachimontones is the wildly underrated Mexican ruin you (probably) never knew existed. However, its location just an hour outside the state capital of Guadalajara makes it an ideal day trip for those looking for something a little different.

Translated colloquially to “pyramid” or “structure” in English, the name Guachimontones is actually a fascinating coming together of both Nahuatl and Spanish language, as “guachi” (or “guaje”) refers to a type of tree, while the Spanish “montones” can contextually be translated to “a lot” or “many.”

In its heyday, Guachimontones was an important and influential site both commercially and ceremonially. Constructed roughly between 350 B.C.-350 A.D., it served as a major base for the civilization archaeologists have dubbed the “Teuchitlán Tradition” and had a population of around 40,000 people at its peak in around 200 A.D. Evidence of some 15 satellite cities has also been found in the surrounding area.

Guachimontones is perched on a gently sloping hill, offering views over the wide-open landscape, lake, and leather-working town of Teuchitlán below. The structure is made of round, stepped pyramids, which are (almost) unique in both the Mesoamerican tradition and the world, with only one other example in existence at Cuicuilco,  south of Mexico City. 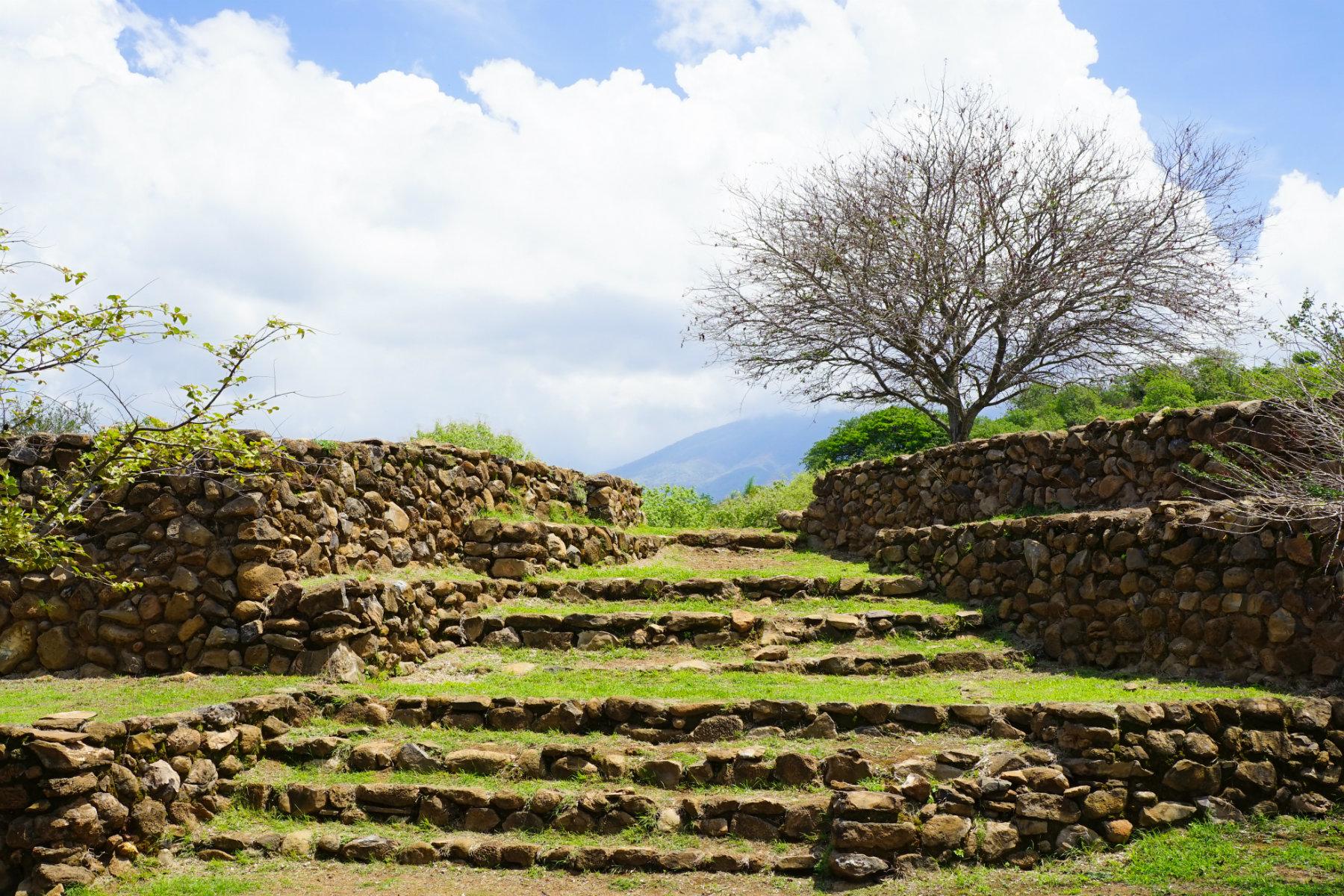 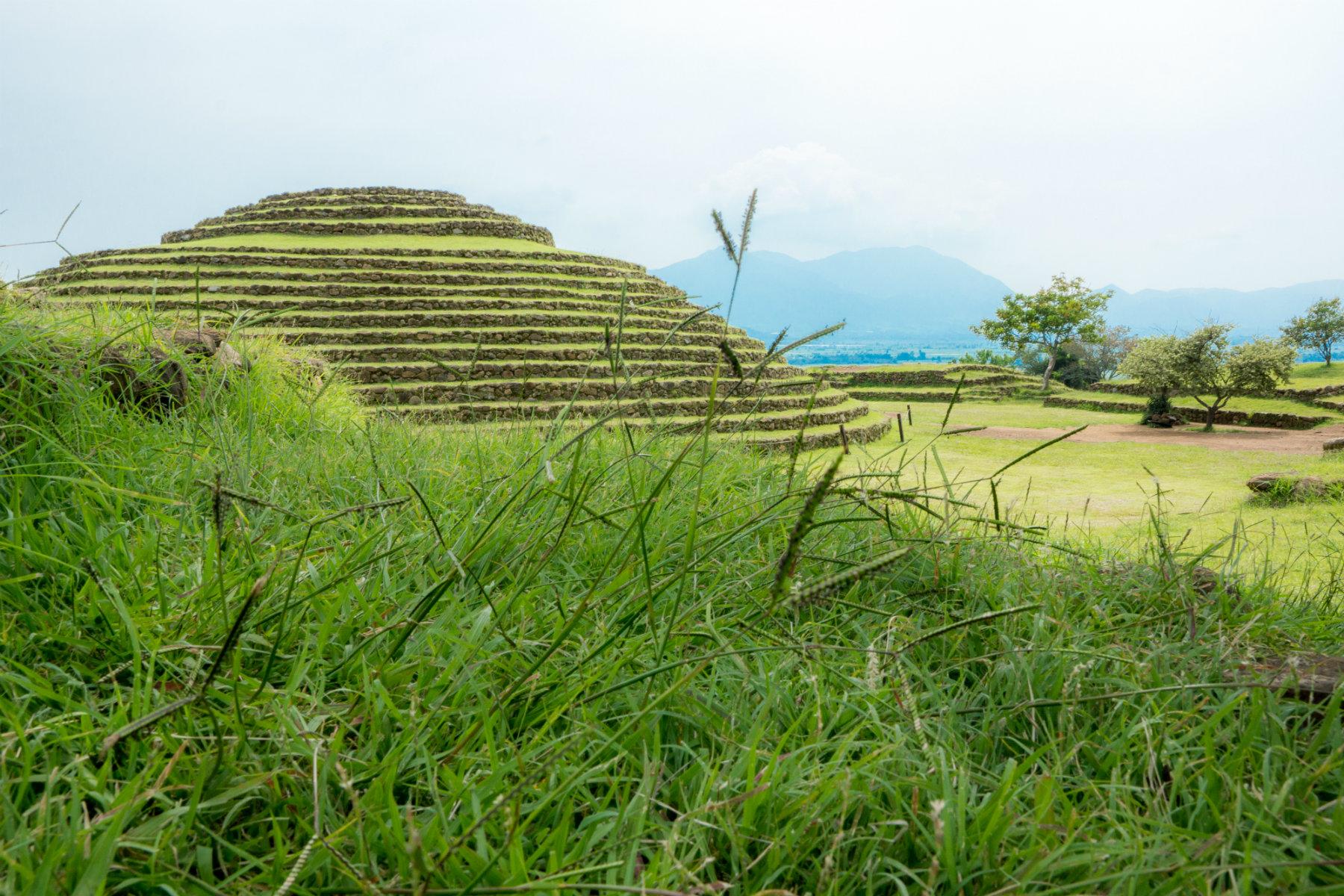 The pyramids of Guachimontones—whose multiple steps and platforms hold numerical significance according to the Mayan calendar—are known rather pleasingly as El Gran Guachi (The Great Guachi) and La Iguana. While El Gran Guachi is the largest at 410 feet in diameter, La Iguana is better preserved (less ransacked and weather-worn). Constructed from a combination of stone, lime, and clay, it’s supposed that the pyramids would once have been reddish-orange in color and possibly dotted with geometric designs; nowadays though, both pyramids bear neat layers of turf atop their concentric circular platforms, giving the illusion that these vaguely alienesque structures sprouted right from the earth.

Beyond the circular pyramids (the undeniable draw of the site), there is also the staple Mesoamerican presence of a ballcourt. The juego de pelota (ballgame) was a traditional sport practiced by many Mesoamericans, and expansive ballcourts can be found at archaeological ruins around Mexico and Central America. Evidence also points towards the presence of complex and ingenious irrigation systems.

An interesting quirk of Guachimontones’ smaller onsite pyramids, including La Iguana, is that they also feature space to support a volador pole at their core, suggesting that the well-known and widespread Danza de los Voladores, a ceremony in which “dancers” jump off and swing around an erected pole in attempt to please the gods, also played a crucial role here. The presence of the apparatus for this dance also ties into the theory that Guachimontonians worshipped the wind god Ehécatl, a supposition supported by the circular (a.k.a. less-wind-resistant) structures and the four staircases representing the cardinal points which sit atop El Gran Guachi.

Obsidian (and pottery) also played a crucial role in the lives of the Guachimontones inhabitants too, being used to make jewelry, spearheads, and even mirrors. The pyramids are situated next to some of the world’s largest obsidian deposits on the periphery of the Tequila volcano.

It’s surprising how long the ruins remained hidden, even after being mentioned by the prolific archaeological artist Adela Breton in the late 19th century. Most attribute the eventual re(re)discovery of Guachimontones to archaeologist Phil Wiegand, Acelia Garcia, and their entourage in 1970, but for full exploration (and the eventual backing by the Mexican government), the team had to wait until 1996. Prior to that, the only course of action left open to the archaeologists was mapping the site as fully as possible and trying to prevent looters from pilfering the obsidian reserves that were discovered throughout the 90-hectare Guachimontones complex. (In fact, this extensive looting led to the inclusion of Guachimontones on the World Monuments Watch list in 2008 by the UN.)

However, it’s fair to say that whisperings about Guachimontones amongst non-locals began way before the 1970 re(re)discovery of the site. In the early 20th century, Dana and Ginger Lamb, a couple of intrepid Californian honeymooners and eventual writers of the popular 1938 travelogue Enchanted Vagabonds, heard about the mysterious ruins and headed over to Teuchitlán to check them out. At the time, it was mainly known only by local residents and those looking to swipe the obsidian artifacts. Guachimontones remained very much off the radar of the archaeological community; yet now, just over 20 years on from being fully explored, it’s a UNESCO World Heritage Site.

So, while it’s fair to say that Guachimontones doesn’t hold quite the all-star appeal of Chichén Itzá, nor is it as conveniently close to Mexico City as Teotihuacan, it’s the perfect destination for visitors who want to see one of Mexico’s most unique and underrated archaeological sites.

10 Puppies From Around the World That Are Very, Very Good Boys

The Fodor’s Travel Awards: The Top Picks for the Best Trips

Send To A Friend